﻿ The Food of Navarra 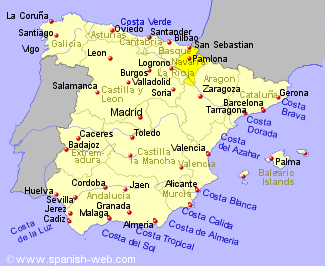 The Food of Navarra

Navarra has its head in the hills but its feet in the warm Ebro valley where there are vineyards and vegetable gardens.
It is famous for its Chorizos, a highly seasoned pork sausage.

Being a mountainous region, lamb is used in many recipes. Lamb chops a la Navarra and Cochifrito, fried lamb, are among the most delicious dishes.
Wild dove, partridge, quail and rabbit are also used.

Asparagus is grown in Tudela and is used in Tortillas, omelettes, whilst red peppers are grown on the slopes down to the banks of the River Ebro. They can be eaten stuffed with meat or salt cod.
These peppers are also used in stews with lamb called Chilindrones.

The streams in the mountains breed trout and these are fried in ham fat and served stuffed or wrapped in ham, Truchas a la Navarra.

A delicious dessert which is regularly served is made from sheep's milk and eaten with honey called Cuajada and also pine and almond cakes called Pinones.