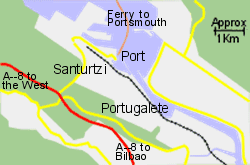 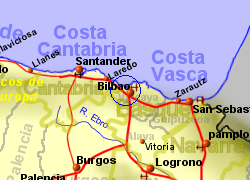 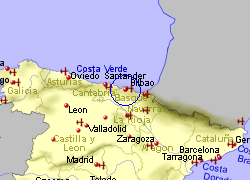 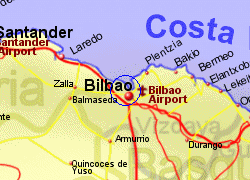 Bilbao port is situated at Santurtzi, approximately 12km down river (north west) from the city of Bilbao and the main train station. There is however the city Metro which runs every few minutes out to the port area. The metro journey to the main train station takes approximately 25 minutes.
The main rail station gives access to the rest of Spain, and beside this is the station for the narrow guage railway which runs along the north coast.

Bilbao airport lies approximately 10km to the east of the ferry port as the crow flies (considerable further by road).

The port has a relatively short road link onto the A-8 motorway which can be busy at times in this import industrial/commerce area.
The are good road connections to the east, west,and south towards either Burgos (just an hour and a half by car for the 170Km journey on the AP1 and AP68 motorways) or Rioja.